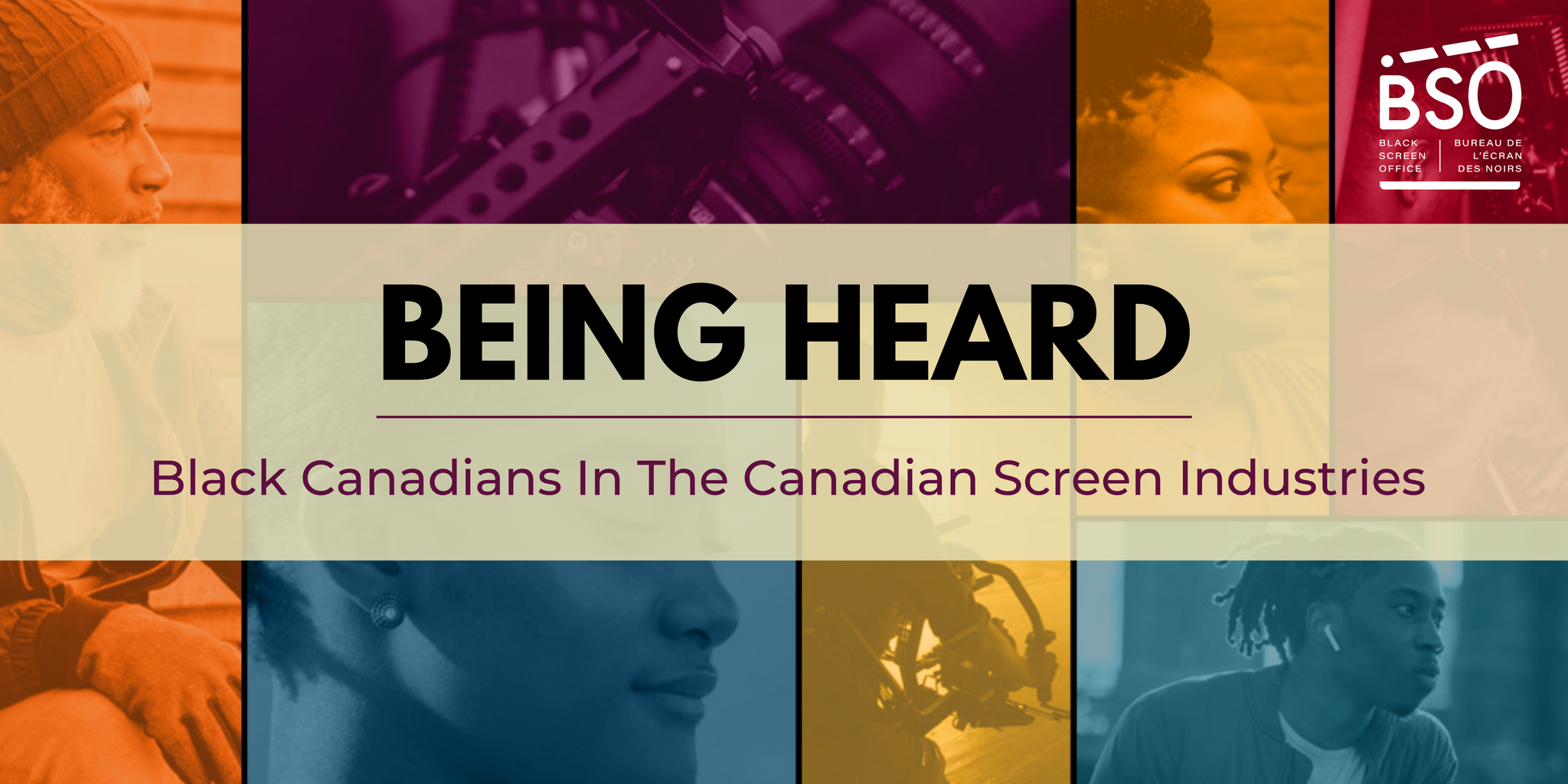 Being Heard Report Reveals What Black Screen Industry Workers Do, Know and Experience

The Black Screen Office (BSO) has released our much-anticipated Being Heard: Black Canadians in the Canadian Screen Industries report—a first-of-its-kind accounting of the prevalence and experiences of Black screen industry workers in Canada. Among the report’s key findings are:
Black professionals are significantly underrepresented in gatekeeping roles within Canada’s screen industries and this absence has a cascading impact on Black screen industry workers and Canada’s onscreen output
Development programs lack the practical focus to deliver on promises of credibility and access for Black participants
There is an urgent need for Black-owned, Black-led policies, spaces, development and funding. Both sustained system changes and immediate impact must be pursued simultaneously.

“Black screen industry workers have not been examined in any meaningful way until now, and without data to support change, the systemic barriers they face will continue. By finally centering Black industry workers, Being Heard provides a clear picture of their objectives and the universal obstacles they face in trying to reach them. We also gathered their perspectives on what needs to change and the interventions and opportunities that genuinely support Black success in Canada’s screen industries.”

The BSO collected data from 426 existing and aspiring Black talent (producers, creators, actors and crew) via online survey and follow-up interviews with 70 respondents. Participants shared their demographic information as well as details about their career development pathways, skills training, paid work, barriers and challenges, helpful supports, and their strategies for remaining working in the sector. The responses provide a revealing snapshot of a previously unexamined cohort of the screen industries and their unique experience.

“Although the Canadian screen media sector has recently started to collect identity information, there is not much out there and many equity-deserving workers are reluctant to take part in traditional surveys due to long histories of oppression and discrimination. The sector is working to increase diversity and equity, but these efforts will inevitably falter if the data used to inform those commitments doesn’t capture Black experiences,” says Joan Jenkinson, Executive Director. “As a Black-led organization anchored in anti-racist research methodologies, the BSO created a safe space for participants to candidly share their experiences. With this and BSO’s other research projects, we now have the evidence base for long-term, sustainable transformation toward more diverse and equitable industries.”

Being Heard follows the BSO’s Being Seen reports, released in February, which examine authenticity and representation from the perspectives of members of the Black, People of Colour, 2SLGBTQIA+ and People with Disabilities communities and provide clear directives to industry decision-makers on improving authenticity. The BSO’s second research report, Being Counted, released in June, collected race-based audience data from Black, Indigenous and People of Colour Canadians—communities whose habits and preferences are generally hidden within traditional audience data. Being Heard completes the BSO’s initial examination of Canada’s screen industries and their impact on Black workers and audiences. The research was conducted in partnership with Quilin, with funding support from Inspirit Foundation, Creative BC and Ontario Creates.